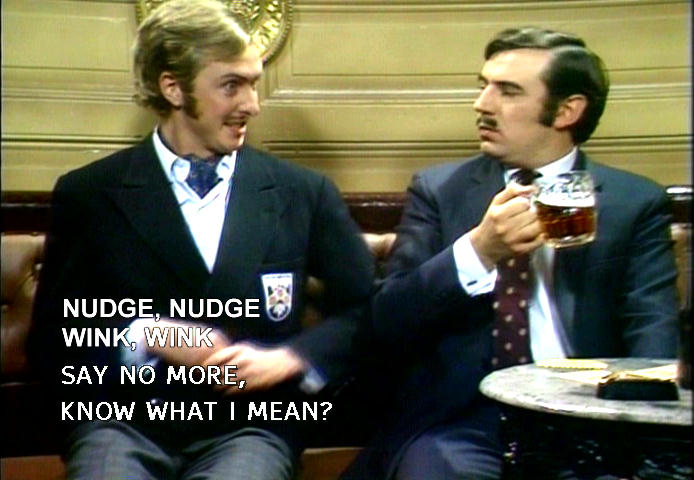 Like many, I've casually watched some Monty Python over the years.  It's always good to run into it on cable when you're getting high.  I was actually hearing them as audio on Dr Demento's radio show for several years in the late 1970s before I ever actually saw the tv show.  Thus, I've been known to carry on about how "Spam, eggs, sausage and Spam doesn't have much Spam in it" for most of my life.

But I'm realizing a little of how much I didn't understand the significance of the show only now in 2008.  I've got the most excellent 16 DVD A&E set of The Complete Monty Python's Flying Circus.  It has all 45 original episodes of the English tv series (1969 - 1974), including a Hollywood Bowl live show among two discs of bonus material.  This right here is the very cornerstone of modern comedy.  Monty Python's Flying Circus is pretty much the comedy equivalent of Elvis Presley's Sun sessions, where the old suddenly became the new.

Younger folks coming up on The Simpsons and SNL might not obviously get that, because the Python sensibilities are so embedded in what has come since.  When Lorne Michaels was creating Saturday Night Live in 1975, they wanted to be the opposite of what they understood to be the bland establishment corporate comedy of Carol Burnett.  No, they wanted to be 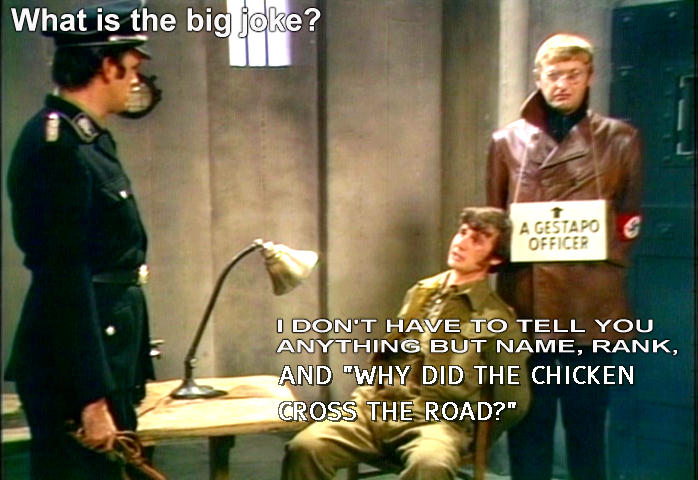 bitingly satirical, intellectual - avant garde like Monty Python - who were only marginally well known in America at the time.  But even SNL was never quite as radical and unique in their sensibility.

I find myself trying to parse out the idea of "absurdism" as that word is frequently used to describe Python.  Looking up "absurdism" however, I don't quite see that.  "Absurdism is a philosophy stating that the efforts of humanity to find meaning in the universe will ultimately fail (and, hence, are absurd) because no such meaning exists"  That seems only in the most abstract way to describe Python.  On the other hand, that might reasonably describe the underlying point of their movie The Meaning of Life.

"Absurdism is related to existentialism and nihilism, though should not be confused with either. Absurdism as a concept has its roots in the 19th century Danish philosopher, Søren Kierkegaard. Absurdism as a belief system was born of the 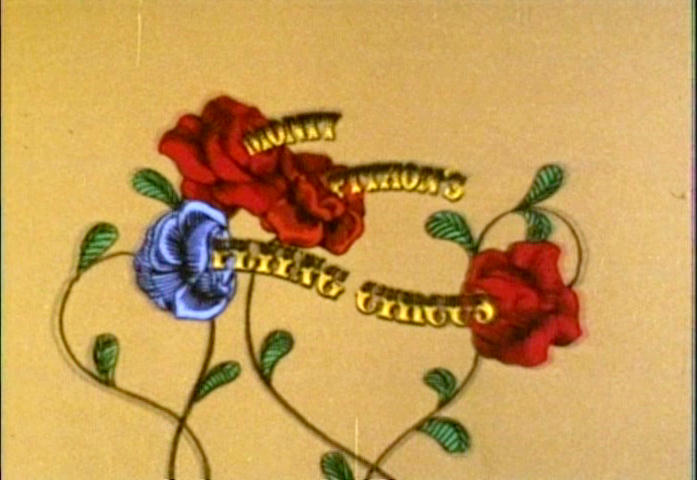 Existentialist movement when the French philosopher and writer Albert Camus broke from that philosophical line of thought and published his manuscript The Myth of Sisyphus."

Kierkegaard and Camus, yuck.  Don't quite see them in the Python picture.  The related Theater of the Absurd, however, sounds closer to the mark. "Though the term is applied to a wide range of plays, some characteristics coincide in many of the plays: broad comedy, often similar to Vaudeville, mixed with horrific or tragic images; characters caught in hopeless situations forced to do repetitive or meaningless actions; dialogue full of clichés, wordplay, and nonsense; plots that are cyclical or absurdly expansive; either a parody or dismissal of realism and the concept of the "well-made play".

That descriptions of playwrights of this European theatrical trend from the 40s and 50s sound like they'd be painfully unfunny excuses for comedy.  That may be why I've never heard of any of them previously.  Perhaps the difference is that Monty Python was actually funny - and the exceptional humor sugar coated some fairly dark philosophical premises. 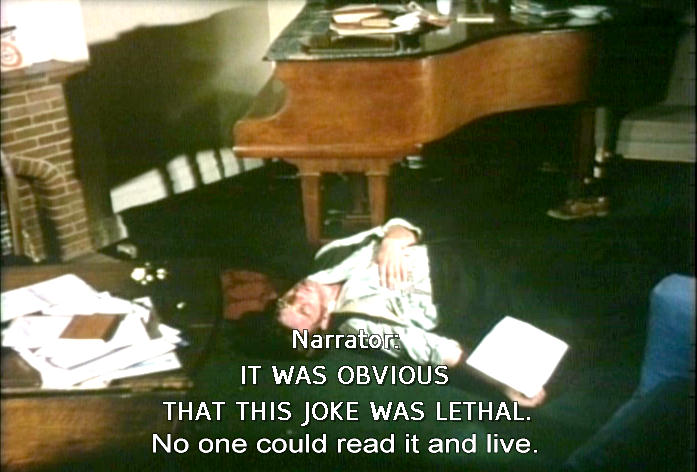 Speaking of dark philosophical premises, I particularly love the central piece of the very first episode from 1969, an extended sketch about "Joke Warfare."  Thinking backwards, I can see how this might go with the post-war existential angst thing.  But actually watching it repeatedly, I'm really taken with the beauty and skill in the riffing from the original premise about a joke so funny that anyone who reads or hears it will literally die laughing - starting with the author.  Over maybe 15 minutes of sketch, they had quite a few funny jokes and site gags.

But what's really noteworthy is the fairly high intellectual riffing in working out the premise. There's an absurd logic to how the deadly joke premise requires the chanting of laments by the men of Q Division.  How exactly would the military go about weaponising the joke?  How would Hitler and the Germans react?  Hint: The Germans  are just screwed in this contest, owing the famously poor German sense of humor.  Funny, Hitler was not.  The intricate elaboration and plot logic are exceptional. 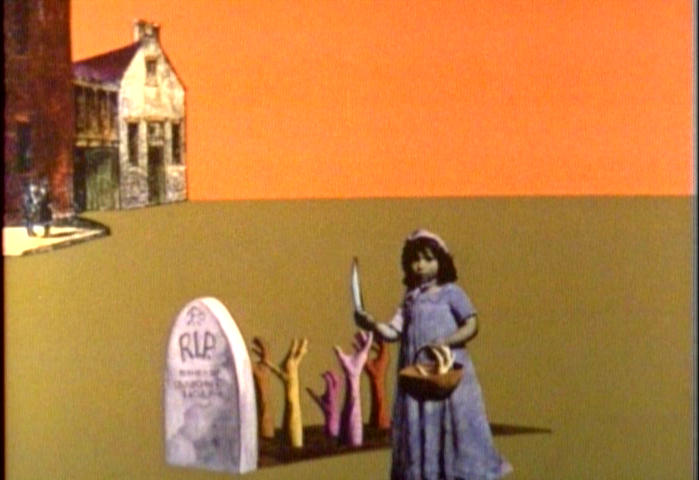 I can see the part of the definition of absurdism that talks of comedy "mixed with horrific or tragic images."  A fair part of that in Python can be found in the obviously crude but totally personal and effective stylings of Terry Gilliam.  Note this image from a maybe 10 second bit with a little girl planting and then wielding a bloody knife to harvest hands growing out of a grave.  It might just slip by you quickly, but the more you think on it, the more macabre it is.  There's a fair amount of the macabre or grotesque in Python, and certainly in the animation.

Then again, more of Gilliam's animations were elaborate site gags with unexpected players coming in from above or beneath, such as this egghead.  Gilliam specifically would probably be the most direct precursor stylistically to South Park.  There's a purposely crude and partly for that reason personal, homemade stamp to South Park animation that seems clearly inspired by Gilliam.  Also, the general South Park tendencies to the absurd and macabre are substantially coming from Parker and Stone's worship of Python. 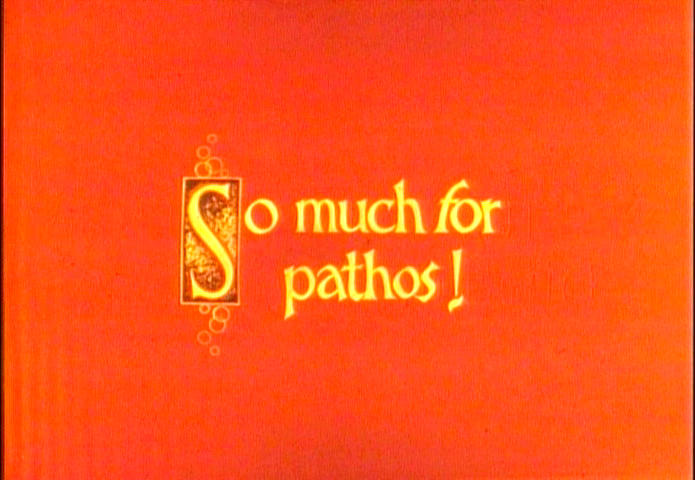 One other interesting characteristic is Python's studied avoidance of audience sympathy.  They completely avoided things that would ask the audience to empathize with any of their characters.  SNL has had many lovable geeks, such as Bill Murray and Gilda Radner's nerds, or the Spartan Cheerleaders.  South Park is highly sentimental, with strong emotional bonds amongst the boys - even Cartman.

Whereas, the consistent and clearly conscious lack of anything where the Python audience is asked to emotionally identify with any characters jumped out at me in the second episode of the series, when they inserted mid-sketch a title card saying "So much for pathos."  That's actually a critical aspect of their whole sensibility.  I can see how that conscious avoidance of audience sympathy comes forward through Andy Kaufman and Seinfeld.  Robin Williams could use a fat dose of this thinking.  Not that pathos isn't great, but the lack of feeling any need to be lovable is very liberating in the Python comic context.

Python was also liberating in a structural way with the abandonment of much sketch writing form, particularly the need for logical endings of sketches frequently.  Reach in and do a funny bit, then cut it off and go on to the next thing.  This was 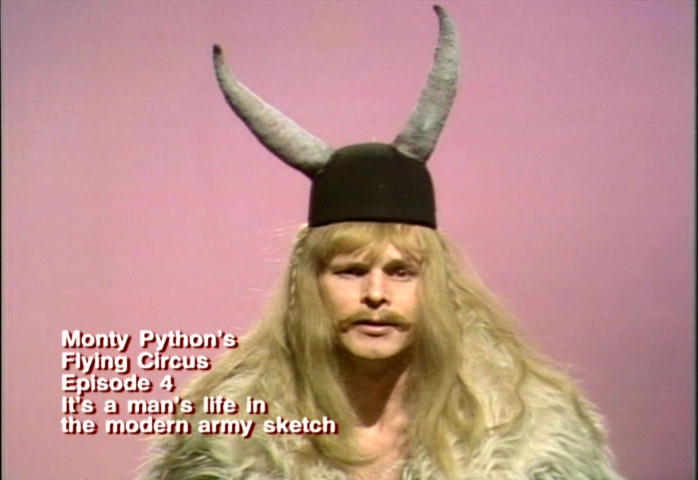 done consciously and formally as a basic element of their conventions, with numerous different contexts over time for someone to simply declare "And now for something completely different."

Also, they got some good use of more overtly intellectual aspects.  As an aspiring Skynyrd-ian simple man, I tend to get a little suspicious of pop culture characters invoking higher culture.  I'm likely to suspect some Comic Book Shop Guy pathology.  But Python wasn't just name dropping to show that they're smart, but actually following out the ideas.  Thus, they had a sketch in which Picasso was doing a performance art thing of painting while driving a bicycle.  They didn't just invoke the name of Pablo Picasso, but actually reflected on his work.  Their sports commentators were discussing which of his styles he might try under what conditions, and what things he'd be foolish to try painting in the distracting traffic conditions of riding the bike.  That's a fairly intricate critical examination for a damned silly comedy sketch. 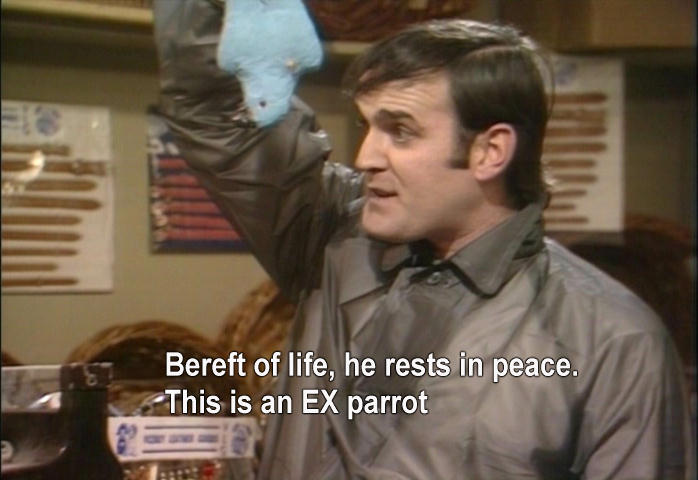 I might also add that Python has an appeal to multiple audiences or different emotional levels in one person.  College boys get extra points for getting fancy literary ideas, but Joe Sixpack or even a young child can get the straightforward absurdity of, say, John Cleese's need for the exasperated polysyllabic explanations that he's got a dead parrot.

There's a joy in the wit of Python that might be seen to undercut the existential angst.  In the abstracted theory, I can see some bit of existential philosophical despair in Monty Python.  But amidst all that angst and what not, we're having a hell of a good time - a big ol' flying circus!  Exactly such joy and art are high among the list of things that in fact give meaning to life, and help to break the existential pall.