Religions and religious belief obviously meet deep psychological needs of homo sapien mammals in a whole host of ways. Some are more obvious, some less so. There are different varieties to appeal to the needs of almost anyone.

Hey, I'm a mammal, and not immune to the pull of religion. Like Pete Townshend,

I learned how to raise my voice in anger
Yeah, but look at my face, ain't this a smile?
I'm happy when life's good
And when it's bad I cry
I've got values but I don't know how or why

The problem, of course, is that religious beliefs mostly just aren't true. Anyone who can read pretty well knows better. Sure it sounds good, but basically Jesus is just Santa Claus for adults. As was said of my idol Barry Goldwater, in your heart, you know I'm right.

Wiccan or pagan belief systems have become popular in the US in recent years as an alternative. A recent Cerulean column at Blogcritics "Of Interest to Pagans" describes an exchange on "hairsplitting" in the pagan community, which was interesting. Two pagans discuss young brethren arguing over rules and practices of Wiccan structure like they were rival Dungeonmasters hashing out their interpretations of Dungeons and Dragons.

How silly this sounds. This sounds so unbelievable, as if some idiots were talking themselves into believing in their D&D characters. My principle player character was Rev Zap, a chaotic neutral Dionysian cleric. Hey, I was 18- but I knew better than to believe in this game. See what happened to Tom Hanks in that movie where he went crazy from believing in a Monsters and Mazes game?

But the thing is that this whole modern pagan flourishing is so groundless that they may as well be worshipping based on the Complete Divine Dungeons and Dragons book of religious pantheons. As Brother Blogcritic the Elitist Pig expressed it in the comments on Ceruleans column, "Calling Wicca syncretic is being generous. It's completely fictitious, made up of fairycake and wish-icing."

D&D does have by rights a claim to at least having a more consistent, thought out and documented set of rules than any Wicca I've seen. You can at least buy a comprehensive box set of D&D rulebooks. That seems at least slightly more credible than just plucking stuff absolutely from the air on an a la carte case by case basis, whatever feels good.

Various branches and groups have tended to try to borrow the credibility of age for their beliefs, claiming "one unbroken tradition" from ancient goddess worship traditions. This is a transparently untenable claim to make in that lots of these people are positing belief systems of undeniably modern vintage.

In particular, a lot of this stuff seems engineered basically as religious iterations of leftist political beliefs, particularly unmistakably modern feminist and environmentalist tenets. Indeed, comments suggest that most pagans have given up trying to claim the "one unbroken tradition" line. The things Cerulean and other pagans say attempting to tie modern practice to truly ancient traditions seem extremely broad to the point of meaningless.

Consider then the critical importance of just plain age in establishing a religion's credibility. Obviously the Unification Church of Rev Moon is bogus. He just made this crap up. Yet his made up crap seems no more irrational, weirder or more straining of credulity than, say, Christianity. What was all this crap about people raising from the dead, and guys living in whales and transubstantiation and whatnot?

This only seems more respectable because the Catholic church comes from a nearly 2,000 year continuous tradition. This many million people have believed in this stuff for SO long that it must have some truth value. A couple of billion Catlickers over a couple of millenia can't be ALL wrong, can they?

But of course, at some point, someone just made this stuff up. I'm speaking equally, of course, of Christianity, Islam, Judaism, etc. That it's some unknown monks from thousands of years ago seems more credible than any modern guy coming up in the last couple of hundred years could ever be, just because the new guys are documented. For example, watching the South Park summary of the history of the Mormons, it's difficult to see how anyone puts much stock in it after reviewing the story of founder Joseph Smith. As Jimmy would say, I mean, c'mon.

Still, his group has way outlasted him, and seem to be reproducing and keeping up the faith after something like a century and a half. If they last another century or two, they're inevitably going to be more and more recognized as a legitimate religion.

I invented a religion once. Indeed, "I was a teenage cult leader." I invented a flower power cult in my high school in 1980. We dropped it after a month or so.

But if we had simply insisted on persevering with this religion, it would be a quarter century old now, and thus about as credible as many of these Wiccan beliefs. My made up crap is as good as your made up crap. It's just as old.

Also, somewhere around 1986 at Ball State University, I had another religious vision. Famous campus evangelist Brother Jed Smock was up on a bench at the main intersection of campus preaching hellfire and damnation to the wayward students. When he climbed down from his podium, The Spirit moved me preach.

Specifically it moved me to preach of The Great Gopher God, who will gnash you in his cosmic incisors for all eternity if you disrespect his gopher followers here on Earth. This seems like a reasonable, credible pagan religious belief- at least as tied to the old traditions as this modern feminist hoodoo.

Again, my made up crap is as good as your made up crap. In this case, though, the practical evangelizing of the Great Gopher God lasted for about the 15 minutes or so that Brother Jed took for a break. On coming back, he gave me a copy of his book Who Will Rise Up? He autographed it with a note praising my preaching style. Obviously I've been fairly sympathetic to the guy ever since. Indeed, Brother Jed inspired my very best college educational experience, my old God and Country newspaper column.

Again, that's been nearly 20 years now, and the Gopher God may be claimed to have at least a couple of decades start on credibility moss growing. The wussy flower power of Father Dandelion seems less appealing to me at this point than the Old Testament fury of the Gopher God. Then there's the Lemiwinks church. They're only brand new in the last year or so, being based on an episode of South Park. Thus my Gopher religion is a considerably more credible rodent-based religion than St Lemiwink's Cabal. Still, they've got a cool logo.

Then, of course, there's Charlie Manson. He started his Manson family based on making up his own religious doctrines that said the Beatles and the King James Bible were sending him messages to go kill people in order to start a prophesied race war. The human sacrifice angle was obviously gruesome and unacceptable in the modern context, but it has at least as ancient a tradition as any other pagan hoodoo. Plus, his immediate group goes back to the 1960s, making it nearly 40 years old for whatever faithful few remain. That gives it as much rational credibility as a lot of modern Wicca which seems to date from no earlier than the 70s. 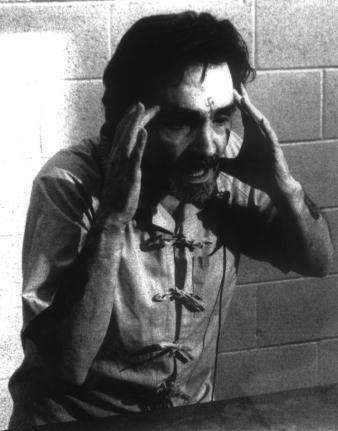 In any case though, you know that Charles Manson, Wiccans, Rev Moon, and I have all just made up our respective religions wholecloth from our fertile imaginations. Any half sensible person would know better than to put belief in any silly crap made up by people now living. What, God reached down only now to reveal the truth to some evil cracker from Indiana (Barger or Manson)?

Some modern LDS or Wiccans might try to claim superior credibility for their made up stuff based on actually believing their hoodoo is really true, unlike D&D or Helter Skelter, which absolutely even the creators knew was fiction. Besides that, though, I find it hard to believe that most of these modern American pagans really believe their freshly minted nonsense.

I don't see how my "real" belief about the Gopher God matters anyway. If it's true, it's true regardless of whether I believe it or not- unless you wish to say that the one true God owes his life to the belief of his audience, like Tinkerbell. Alright now, everybody applaud and believe REAL HARD, and we'll bring Jesus back to life. I don't see how the fact that some people really, really believe patent nonsense makes it any more credible.

It'd be hard to start a credible new religion now. There's too much free flow of information for it to work. Particularly, anyone arising in the last century or so is likely well documented. It'd take you five minutes on the net to look any of us up and discredit us as divine emissaries.

Really old stuff is much easier to talk yourself into believing. Besides just the pure institutional throw weight provided by age, there is more mystery and mist in which you can choose to loose your rationality. Who exactly actually wrote Genesis? What were they thinking? You know that Charlie knew better than his Helter Skelter foolishness, but maybe these mysterious unknown priest several thousand years ago really believed. Maybe they really were more spiritual than us, and walked closer to God.

We don't absolutely know who the people are who wrote much of this stuff, or what their immediate personal motivations were. Thus, we can't know absolutely for sure that the authors of the Bible or the Koran were charlatans. What you don't know, you get to fill in with your own imagination, giving you more wiggle room to talk yourself into believing nonsense. It's the faith of our fathers.

Thus, the best you can do is invest your faith ie credulity in people that you're at least not sure are crooks. That's a pretty thin reed to grasp onto, but that's the inherent limitation of faith.

"I've never understood how God could expect His creatures to pick the one true religion by faith - it strikes me as a sloppy way to run a universe." -Robert Heinlein

You do what you can.