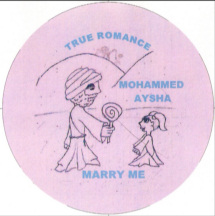 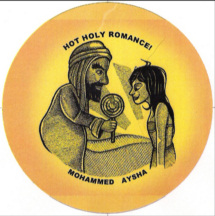 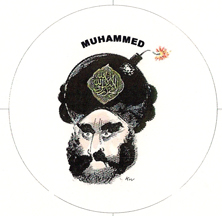 Look, for starters you've got to understand that holy men play by different rules than the rest of us.  If God hisself tells some holy man to diddle a goat, then it's okay.  God said to.  After all, special men have special needs.  It's kinda like Michael Jackson.

So then, I will try to explain without judgment that the prophet Mohammed had as many as 23 wives, including one of special interest named Aysha.  Mohammed married Aysha when she was six.  Note however that he used remarkable and commendable restraint in somehow refraining from fully consummating the marriage until she was nine.

To celebrate this story from the Koran, I asked an artist friend for a caricature of the prophet and his young bride.  Here is the excellent image I got back:

This artist would not even consider it an insult to be described as a deviant pervert.  He likes at least drawing some pretty evil S&M images.  Yet I think he wasn't quite evil enough to get the point here.  The artist imagines the scene in an image he can relate to.  Mohammed's just a normal schmoe guilty of wanting a little underaged tail.  But the Lolita girl in this picture looks more like at least 11 or 12.  At that rate, this would be an image representing maybe their fifth wedding anniversary - and he remembered and bought her a lollipop to celebrate, just like the night they first met.  It's good to see that the romance hasn't gone out of this relationship.

Right here in the neighborhood, a young girl made a drawing just for me of the night Mohammed and Aysha met.  It's really quite the romantic image.

Jesus famously said they they should always most definitely let the little children come to him. But that fuddy-duddy just wanted to heal the children and tell them that he loved them.  Ol' Brother Prophet Mohammed, on the other hand, PROVED his love for the children by marrying one.  Surely that goes deeper than Jesus.

Of course some white devil infidel might take Mohammed's actions as indicative of the depth of the misogynistic sickness and fear of women in the Muslim culture.  But those white devils are racists not properly respecting their alternative culture.  Bad white men!

In honor of the prophet and in the spirit of multicultural acceptance and inclusivity, I have re-written a song that our children can sing at school or at Sunday school - but hopefully both.

All the Muslim children of the world

Red and yellow, black and white

The are sexy in his sight

Mohammed loves the little children of the world

May Allah be praised.

And may God bless and protect Trey Parker and Matt Stone.