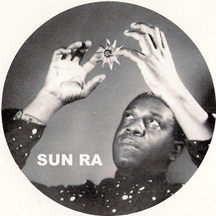 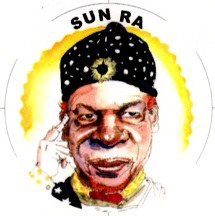 In 1974, Sun Ra made a scripted feature film Space Is The Place.  I can't exactly say that it's a

great movie, cause it's pretty cheesy. But it's pretty fascinating on a whole lot of different levels, and well worth watching.  The best way to frame it is to look at it as a blaxploitation film.  Within that more modest milieu, this film is excellent.

The film is an elaboration on the ongoing Sun Ra mythology, and a lot of the interest here is in how exactly he meant that mythology.  He insisted for many decades and right up till his passing that he came from Saturn, and that Sun Ra was his true name - not what was listed on his birth certificate in Alabama.  Now of course he was a regular human Earthling, but reading a little about him makes his understanding of this intriguingly ambiguous.

You might get the idea that he somehow had himself talked into believing it - or at least tried awfully hard.  In a more recent interview with the director and producer included on the DVD, they noted in passing that during the whole production of the movie he never broke character.  But that does not seem to have been just an affectation adopted for their benefit.  I'm not seeing anything where he was "dropping character" ever for anyone.  That'd be an awfully difficult front to keep up all the time for decades if you didn't at least halfway believe it.

In the plot of the film, Sun Ra started as some kind of freaky piano player billed as Sonny Ray in Chicago 1943.  He went traveling in space for some years, and came back to bring an "altered destiny" to the black people.  In short, he came back with a big space ship ark to emigrate black folk to a space Eden, away from the judgement ready to come down on Earth, ie Whitey.  He's some kind of black messiah from space.

When asked by skeptical young black folk how they could know him and his story were true, he explained that no, they were a myth - just like them.  They weren't real either in this world either.  As far as the powers of Earth were concerned, they didn't exist.

The producers in that DVD interview describe their conscious invocations of super cheesy science fiction films from the 1950s, which would make sense in the context of the pre-existing Ra mythology.  Thus a lot of the movie comes off as camp.  On one hand, this makes a lot of the racialist nonsense much easier to take for someone like me who typically has minimal patience for that black foolishness.  Plus, Ra's demeanor and tone don't have anger or shrillness.  But yet on the other hand, Sun Ra himself seemed to disregard and ride above that idea of camp.  It's a bit like if Tim Curry filming Rocky Horror had himself convinced that he really was a transvestite scientist from outer space.

Thus, he seemed to be taking his message seriously, whether or not he truly literally believed he was from space.  It is noted that while there was a screenwriter, Ra wrote all of his own lines - and they were way the cheesiest stuff in the movie.  In the first scene, in space Eden talking to his partner the mirror man he says, "The first thing to do is to consider time officially ended."  Oh, okay.

Naturally, the music of Sun Ra and his Arkestra is a big point of the movie.  They had in fact started out to make a straight concert film before it became a scripted drama.  A few general comments on that, then.  First, I don't know that this was particularly his best music (from what I know, I'd say that was probably his 1967 Mu album), although it was certainly effective as film music in the dramatic context.

I'm not entirely sure what to make of the music of Sun Ra.  Like this film, I can't say that it was great - but it is interesting.  His music had a lot of personality and style. I bet I could recognize a Sun Ra recording, cause nothing else sounds like him.  I very much dig a lot of the colors of what he was doing, and I get substantial meaning from his space music sound.  That's something that I don't quite have words for - particularly since he was making largely instrumental music. There mostly aren't many textual clues to explain it, and it cuts a lot of different ways.  Best thing to start explaining it is to describe it as an imagining of transcendence - but that's obviously pretty broad.  There's something there, though.

Thing is, as much as I dig the idea of Sun Ra and like the general sound of his music, I don't know that he was that great a composer.  I like absorbing the sounds, but I'm not that impressed with any of his specific compositions as being individually memorable.  I've certainly never found myself walking down the street humming a bar of Sun Ra.  Can't quite remember how any of his tunes go.

But there were plenty of ponderous lyrics in the final big concert set piece.  "Time passeth away, but the unknown is immeasurable and never passeth away. The unknown is eternal, cause you will never know what it is all about.  Your wisdom will be when you say ‘I do not know.’  Your ignorance will be your salvation."  These lines were delivered slowly, and then repeated by the striking June Tyson, like a freaky space place version of gospel call and response. It is some measure of the musical skill of both Sun Ra and his outstanding Arkestra that those utterly BS philosophical profundities almost sound half reasonable as he's delivering them.

Also, there are lots of curious and seemingly related but not really connected pieces.  For all the idea of the sins of the power establishment or whatever, there's very little in the way of outside oppression.  A couple of white goons from The Government take Ra prisoner at one point, but they didn't seem to care much about race.  They were trying to squeeze him for the secrets of space and time travel and such what.  The one point of race in that mix was their hilarious method of torture.  They had him tied up in a chair with headphones on, presumably so they wouldn't have to hear the tape of "Dixie" they were forcing him to listen to.

In fact though, it seems that the main oppression of black people here (as in modern real life) was intramural.  The principle villain of the piece is a black guy identified only as The Overseer.  In short, he appeared to be the head pimp of the planet, luring women into prostitution, and presumably drugs.  He was a distinctly Satanic figure, the real slaver. Generally speaking - again as in real modern America - the word "nigger" was 90+% used by black people.

Also though, one of the more truly dramatically effective parts of the film was a young street pimp.  He almost felt bad as he was trying to brag on how he'd slapped his whore around after he'd caught her listening to Sun Ra records rather than out turning tricks like she ought.  He eventually gave up dope, made a tearful repentance to Sun Ra, and was granted entrance to the ark and salvation.

Apparently, The Overseer was somehow in cahoots with the evil white power structure, though how and to what ends was not even hinted at.  The only place where that was clearly shown was in an interesting scene involving a pair of middle aged NASA scientists.  The Overseer brought them to a brothel, and hooked them up with some special hand picked prostitutes.

They end up abusing the prostitutes and hurling racial epithets - but even that wasn't really racial and the abuse was not entirely unreasonable.  The girls ended up mocking them mercilessly for failure to perform.  They humiliated them verbally about as hard as they could, laughing in their faces to the point that they fled half dressed and clutching their clothes to escape the torment.  Then halfway down the block, these previously perfectly friendly geeks got a change of heart and went back to slap the whores around.  When they addressed the madam as "nigger" on their exit, it wasn't about race.  They had been deeply and purposely humiliated, and they were reacting with the simplest and most obvious hurtful word they could conjure.

That was about the only white display of hostility to black people in the film, other than making Sun Ra listen to "Dixie."  You'll see that Sun Ra's audience included a good percentage of white folk both in the early "Sonny Ray" club scene and the climactic concert.  I'm not sure what whitey's sins were exactly, but the space Eden was specifically for black people.  The nice white people at his show were left behind as the ark headed into outer space, and the Earth was destroyed in "judgement."  This hardly seems fair, particularly as I'm betting that a good majority of the folks buying Sun Ra records and making his living were of the caucasion persuasion.

The (white) producers of the movie made some display of saying how the movie was some kind of statement about the early 1970s and race and such, but obviously weren't taking the whole thing too seriously.  They were consciously invoking 50s sci-fi for camp.  Plus, they waxed nostalgic on their production partners who split some costs with them as they were filming Behind the Green Door.  Hard to take it all real serious after they describe the half clad "actors" lounging around their filming, waiting their turn to use the sets after Ra's people got done filming for the day.

But then Ra himself seemed intent on making some kind of artistic statement, not just managing to make a movie.  He apparently could not be satisfied to ever let the movie go as a finished project.  He kept wanting to tinker endlessly with it, trying to get his statement just right.  Close enough, I say.