I'm a major geek for politics.  I could tell you considerably more about which candidate came in third in what primary of 1996 than any sensible person would want to know.  But I've come up with a considerably more interesting and worthwhile point of attention recently.  I spent a good part of the couple of days around the 2008 Iowa caucuses watching a really excellent History Channel documentary series on The Presidents.

This was originally eight one hour programs (about 45 minutes per without commercials) that first aired in 2005, available on three DVDs.  That figures out averaging about eight minutes times each president.  Now of course there's only so much ground you can cover in that time, but they get surprisingly much into that frame.

Looking at it, these entries mostly seem like just enough to give an attentive viewer some sense of the interesting particulars of how each president got there, what they were like personally and in their management style, how they were regarded in their time (often very different than how they are regarded now), and their most significant accomplishments and failures.  One of the simple and effective standards for each of the 43 presidents is basic baseball card type graphic, an image, signature and dates on front, and a basic personal checklist on the back. 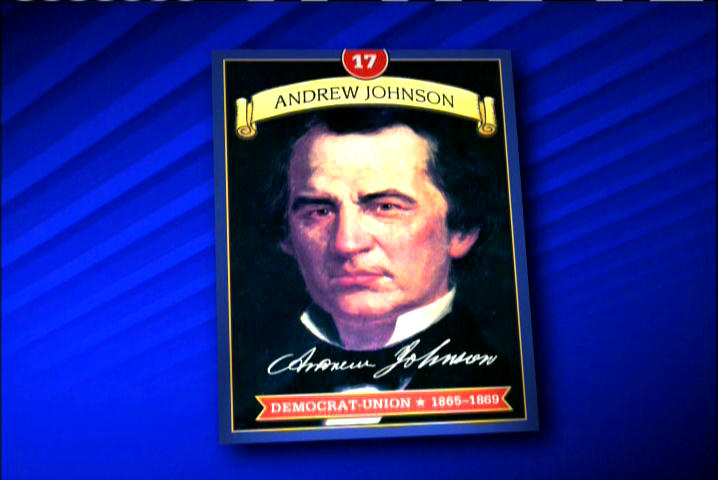 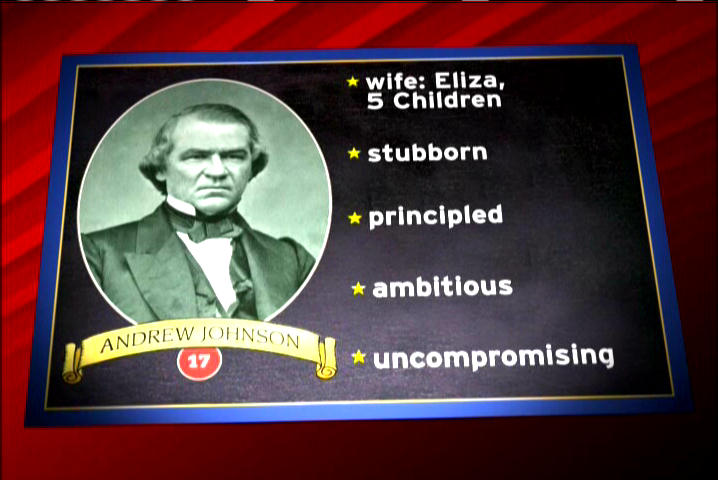 That's a fairly effective set of simple visual aids that get combined with a lot of fairly densely layered but generally easily grasped details, starting with a good straightforward narration.  But then the benefits of a properly budgeted History Channel show adds a lot in visuals.

Of course, there's lots of video and such of the modern presidents, but they got a lot of good out of all kinds of vintage paintings both action scenes and portraits of the pre-photographic presidents and modern shots of historical places, and the talking head historians have maybe just the right amount of face time, giving 30 seconds or a minute to effectively stop the cutting back and forth of images to make important analytical points.  One thing that I could have done without in all this are the little bits of re-creations.  They don't have sound and get maybe just a few seconds apiece.  A lot of them are so quick as to be almost subliminal, gone before you would become conscious of the artifice - which is good.  There was a somewhat distracting and obnoxious bit with an actor playing as Chester Arthur as a window shopping dandy. 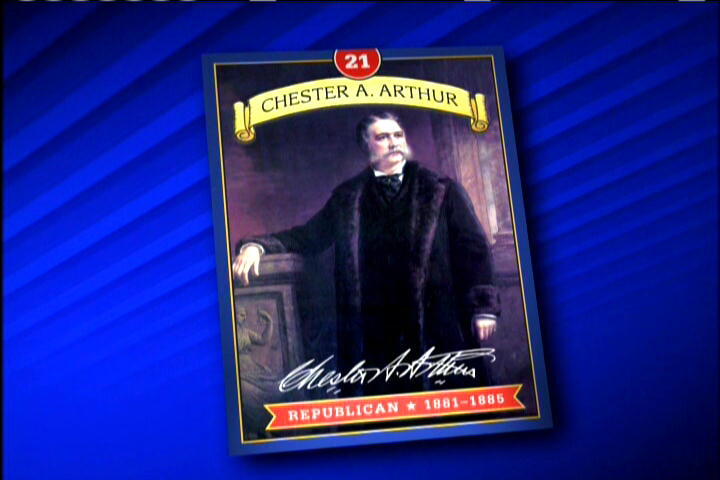 One really useful visual point that they actually could have done more with is the usage of vintage editorial cartoon, such as this depiction of Arthur as a "great machine trick."  This gives a pretty good idea of natural viewpoint that many contemporaries would have had. 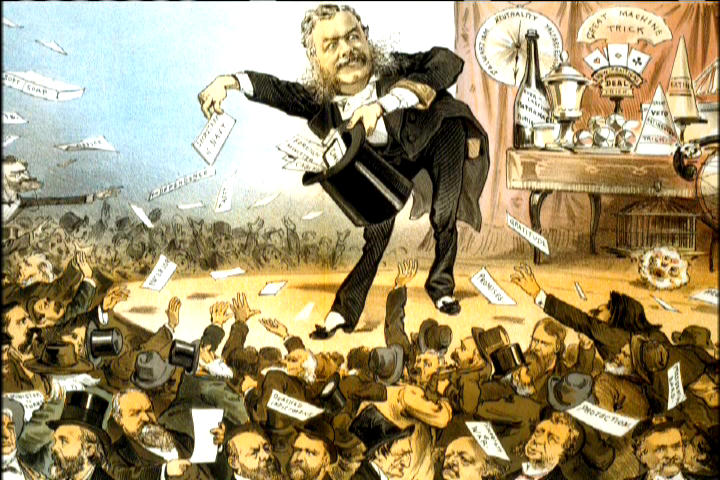 Chet Arthur had a particularly interesting entry for being one of the less regarded presidents.  In his background, he came up as tax collector of the New York Port Authority (a really important post in the pre-income tax era) with sponsorship of the particularly egregious New York patronage machine.  President Hayes had made a big point of removing him from the job in a highly public attempt at civil service reform.  The really interesting thing about that is that when he ascended to the presidency after Garfield's assassination, Arthur became the one who actually passed major civil service reform, even at the expense of his long friendship with Senator Conkling.  His own party wouldn't nominate him to run for his own term after that, but note also that he set about an apparently very desperately needed upgrade of the navy - which apparently had less than a half dozen ships that were really top flight.  Seems like actually pretty fair accomplishment for a less than one term president.

Another tact that could be seen as distracting or illuminating (somewhat mixed results there) is the occassional invocation in narrative and video of modern issues seen as reflecting similar types of issues.  Thus, the machine hack Arthur from the old school reforming civil service gets cut with images of the stalwart anti-Commie President Nixon going to China.

Inevitably, there are going to be analytical opinions that I find disagreeable in some spots.  A lot of that comes from the basic dynamic of my status as a rightwing nutjob.  The "great" presidents as generally recognized are the ones who Did Big Things, like Lincoln and FDR.  I'm generally opposed to politicians Doing Big Things, and would thus rate Abe and FDR as among our all time worst presidents.  I would be more inclined to dig some of the ones who didn't that much want the job, and were thus not so ambitious to Do Something to make a big mark.

I most often would prefer a president who isn't trying to really run the whole country, staying out of the way of free people trying to do for themselves. "First, do no harm" is my political motto.  William Howard Taft springs to mind here, God bless him.

But still, this series was created by serious historians with the intent of objectivity.  Thus, I picked up a new juicy tidbit on Abe Lincoln, whose status as the supposed Great Emancipator I do not recognize.  A new bit on that for me here was a General John Fremont.  Early in the war, he went into Missouri and took it on his own authority to free Confederate slaves.  Lincoln sacked him for this offense.

The DVD set also includes a bonus full length 90ish minute documentary on First Ladies.  On one hand, this part seemed to lack structure, cutting back and forth from ancient to modern to middle presidential wives without rhyme or reason.  But there's a lot of very good stuff in there.  First Ladies are really pretty important, not just obvious political interlopers like Eleanor Roosevelt or Hillary Clinton.  Behind every great man is a great woman, and all that.

And behind every crazy dictator is liable to be a psycho woman.  I'd heard just a bit about Mary Todd Lincoln, seemingly suffering from lifelong depression, but a couple of sentences in a high school history book doesn't really explain it.  Thus, I had heard but didn't quite register previously what a poor, miserable thing she was.  Abe's got a huge war going on with folks dying by the hundreds of thousands- and then he comes home to the White House where his wife is sponsoring seances to talk to their dead son.  This seance business was apparently popular entertainment in those days for the upper crust.  Still, it sure seems like John Wilkes Booth could have done her a big favor if he'd saved her a bullet.

The last few entries, starting with Reagan, were especially interesting to me as demonstrations of the human mental limits of even good, well meaning historians.  The writers and commenters are mostly professional historians trying to give a fair and balanced presentation.  But even with their good intentions it jumped out at me how caught up they can't entirely avoid being in the political passions of politics in their own lifetime.  Thus, for example, they couldn't help themselves from being incredulous and a bit mocking of Reagan's Strategic Defense Initiative, which they mostly refer to by the derisive moniker "Star Wars."  You could tell how much they were struggling not entirely successfully against their own instincts to avoid indulging is Bush Derangement Syndrome.  The series ends with his 2004 re-election.

This series is highly watchable, densely packed with facts presented in a clear and easy to follow format.  Even if you're a big US history buff, you'll probably learn quite a bit.  But if you're a product of a typical American school, this few hours of video will tell you ten times more presidential history than you'd get in 12 years of school.  This would be an excellent and entertaining gift for any younguns you have that are anywhere intellectually north of Beavis and Butthead.

Boning up on the real Teddy Roosevelt is just much more fascinating than watching John McCain's imitation of Teddy, and Eleanor Roosevelt was a lot higher creature than the cheesy imitations of Hillary Clinton.