Neil Young: The Exalted Songwriter at 60 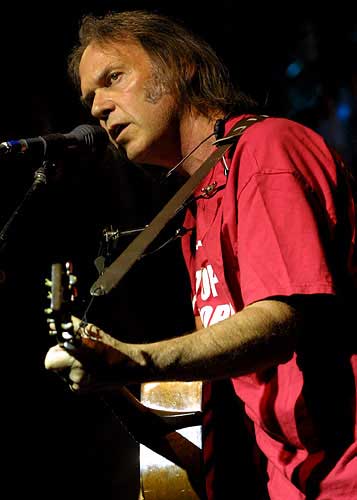 I'm not known as the world's biggest Neil Young fan. He picked up a lot of Dylan's worst behavior of slopping stuff out in a half-assed manner in the name of supposed spontaneity. He's made many records that could have benefited a lot from just taking a little more time to think the melodies out more.

Still, he hits paydirt now and again even with the extended guitar stuff that isn't usually to my taste. You can't deny "Cowgirl in the Sand," and "Down by the River" surely rates as one of the best rock and roll murder songs.

I think of myself as something of a Neil Young skeptic, yet even at that I'd still say he rates as one of the greatest songwriters of the rock era. You just can't deny the classic Harvest album, or a whole lot of other great songs scattered across 40ish years of recording. When he's on his game, he's hard to beat.

For starters, "Sugar Mountain" sports one of the tenderest and most memorable melodies he would ever write. You can't be 20 on Sugar Mountain, but you can write a hell of a wistful song about having to leave childhood behind. This may be the most effectively sad song in his catalogue.

Those Who Know will tell you that "Cinnamon Girl" rates as Neil Young's best song. This is one of the greatest truly romantic rock songs ever. To me, this song stands as the best model for the whole grunge movement still a couple of decades away. Note that this fuzzy guitar is clearly composed, thought through and succint, rather than just slopped out at great length. Listen to this back to back with the White Stripes' "Dead Leaves and the Dirty Ground" and you'll probably end up liking both songs even more.

Tonight's the Night stands out as among his best collections of songs. The overdose death of a roadie provided enough sobering focus to inspire the pure dread of the classic title song. Not that it would stop him from writing the sing along stoner anthem "Roll Another Number for the Road" for that same album.

Most folks rightly recognize Harvest as his greatest album. Some rock and roll hardcore prefer the big guitar records, but this acoustic album is nearly inarguably the best batch of songs to ever come from his pen. Generally, the less loud guitars on the album, the more careful attention he pays to his composition. "Heart of Gold" is just a pure, high grade modern standard. I appreciate why Lynyrd Skynyrd bristled a bit at his condescending attitude toward Southerners, but "Alabama" is a fine song nonetheless, as is "Southern Man."

He should definitely be thought of as primarily a songwriter. He's not a particularly interesting guitar player, God knows. He's not the greatest arranger or producer. He certainly pretty much sucks as a singer. He sings better than fellow beady-eyed Canuck Leonard Cohen- but that'd be setting the bar awfully low.

Some of this came out to me this summer listening to KD Lang's modern classic Hymns of the 49th Parallel album. A couple of hooks had stuck, but "After the Goldrush" had never made much impression until this high end singer got hold of it.

That "Helpless" song started sounding better and better. I was thinking about hunting it down p2p when I noticed that I already had it. It's on the CSNY box set that I've had on the hard drive for a year. It had made so little impression in their recording that I didn't remember it at all, even with their famous vocal harmonizing. But danged if there isn't a hot song there. KD should do a Neil Young Songbook album.

Surely I'm missing some gems buried among dozens of albums, but right here's a list of songs to put the guy into any songwriter hall of fame:

"Cinnamon Girl"
"Sugar Mountain"
"Southern Man"
"Alabama"
"Ohio"
"Helpless"
"Heart of Gold"
"Tonight's the Night"
"The Needle and the Damage Done"
"After the Goldrush"
"Old Man"
"Down by the River"
"Like a Hurricane"
"Cowgirl in the Sand"
"A Man Needs a Maid"
"Rockin' in the Free World (Electric)"
"Don't Cry"
"Are You Ready for the Country?"
"Love Is a Rose"
"Roll Another Number for the Road"
"Hey Hey, My My (Into The Black)"
"Let's Roll"
"Long May You Run"

"NEIL YOUNG (HAVE YOU FORGOTTEN)"