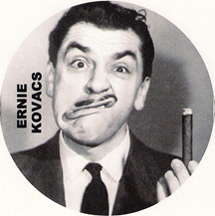 The High Concepts of Ernie Kovacs

Ernie Kovacs was a little different kind of cat, to such an extent as to find myself balking a bit at calling him a "comic."  He was certainly mostly humorous in his effect, but laughs were often a byproduct more than the main point.  Conceptual tricks and experiments with the new video medium were more the point than jokes and punch lines.  He was not really in the same line of work as contemporaries Milton Berle or Lucille Ball.  Thus my reticence at describing him as a comic or comedian.  That doesn't strike me as usefully descriptive of what he was doing.

It might be better to describe Ernie Kovacs principle artistic occupation as high concept experimental visual artist.  Through the 1950s till he died in January of 1962, he produced for different networks, notably including monthly NBC specials in his last years, a body of work that might reasonably be described as avant garde.

Then again, his most famous bit was the Nairobi Trio.  This was simply three monkeys playing a song, with one monkey in the middle who rebels against being used for a drum.  The delightfully queer "poet laureate" Percy Dovetonsils was charming, but not particularly high concept.

But some of his best stuff was highly interesting in effect - without being all that funny.  The Eugene character could work silently doing all kinds of interesting things at some length, but I was more smiling in gentle admiration for the all encompassing freakiness of his little world rather than really laughing.   It's fascinating to watch, but funny isn't particularly the main point.

Music was a big element of his statement.  A good bit of his programming consisted of creating ersatz music videos.  Office furniture and files and phones would open and close in time to music.  Some of the effects were humorous, like eggs crashing in a cast iron skillet in time to "The 1812 Overture."  But then, he re-introduced one extended bit visualizing a Bartok concerto claiming on air that it had gotten the biggest audience response of anything he'd ever done.  It was a fairly good serious dramatization, but there was nothing vaguely funny about it.

Kind of bracing and undercutting some of the light tomfoolery, Kovacs definitely had a sense for morbid humor.  I was particularly intrigued by the dark game show parody "Whom Dunnit?"  The premise of the game show was that some at least semi-notable public person would shoot a contestant, who would then go out and answer questions from the celebrity panel as they try to figure out who shot the contestant before they die.  That's some sick stuff, right there.

By rights, a fella needs a couple of volumes of the best of Ernie Kovacs.  It's like the basic building blocks of of modern video comedy.  One way of putting it, you can pretty well bet that folks from Monty Python and South Park know their Ernie Kovacs.  The creators of Friends and Everybody Loves Raymond probably do not.